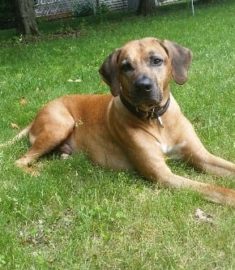 Wyatt is not only a grand champion show dog who has competed at Westminster six times, but is also the leading cancer and disease detection dog in the world. He has saved thousands of lives of firefighters and first responders. He is a father, grandfather, a great-grandfather and a best friend, particularly to his owner, renowned canine behaviorist Janice Wolfe, whose life was saved twice by this incredible hero. Wyatt’s mother, Champion Rambo’s Montana Willow, a Westminster winner, is also preserved genetically through ViaGen Pets. She too was a top service dog and cancer detection hero.
When that best friend must leave us to cross the Rainbow Bridge, it is heartbreaking and gut-wrenching. A dog with talents such as Wyatt’s comes along once in a lifetime, which makes which makes the potential loss of that dog even more unbearable, knowing that he could have saved so many more lives. By cloning Wyatt, we hope to continue not only the genetic component of what component of what makes him so beloved, but also to save lives with a genetically identical and hopefully equally talented individual. How many more thousands of lives can be saved because of the potential miracles of ViaGen Pets? Time will tell.