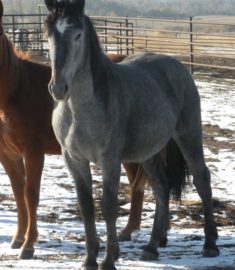 The legendary bucking horse Airwolf was cloned in 2008. The foal, dubbed Wolfie, was born in Canyon, Texas, and now resides with his older twin at the Franklin Rodeo Company in Alberta, Canada. He will stand as a stallion to pass along the influence of the famous gelding. “What we’re doing is going back 20 years and reversing the decision that Shane (Franklin) and his dad made to geld the colt,” said one of Wolfie’s owners, Kelly Armstrong. Airwolf was inducted into the Canadian Pro Rodeo Hall of Fame in 2006 after a career in which he was named Canadian and World Bareback Horse of the Year (1993), Canadian Saddle Bronc of the Year (1999), and Best Saddle Bronc at the National Finals Rodeo (1999 and 2003). “His mama was the wind and his daddy was a train, and there’s nobody walking the earth today that was as wild,” says Armstrong.