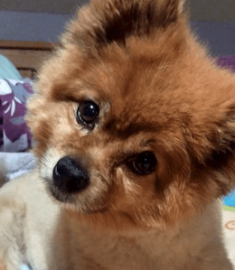 It all started on January 23, 2007 when my little Pomeranian Sweetpea gave birth to three puppies. She was a very young mother and was not sure what to do or what was happening to her. When I left for work that day, I could see that she was in labor. I stayed at work for a while and then told them I had to leave because I could not miss this important day. When I walked into the house, I could hear a little whimper from the bedroom. Sweetpea had given birth to one little puppy, that I would later name Tuffy. When I walked into the room Sweetpea was pushing this little puppy in circles with her nose in her bed. I could not believe how mean she was being to him! Sweetpea gave birth to two other puppies, but Tuffy was the only survivor. I decided to name him Tuffy due to his rough entrance into the world and for enduring his mean mommy. Sweetpea wanted nothing to do with Tuffy and would not nurse him. From that day forward, I became Tuffy’s momma. I started bottle feeding him, taking care of him, and spending every free minute I had with him. The day that Tuffy was born was the best day of my life and from that point on my life changed forever.

Tuffy was my best friend, my baby, and my protector. I was very fortunate to be blessed with such a sweet boy! I have had other dogs and still have a dog (his sister Sweetie Pie from a different litter), but Tuffy was not a dog. He had such humanly eyes that would stare deeply into my eyes, a way of listening and responding to me like he understood my every word, with the tilt of his head or the expression on his little face. Tuffy was super smart and had a very large vocabulary. I worked with him and taught him all his favorite “babies” names; Elle, the elephant, Leo the lion, Dino the dinosaur, Hippo, the hippopotamus, and his favorite, “Monkey.” Out of his hundreds of toys, all I had to do is say one of these names and he would bring me the correct toy. Tuffy also had an obsession with blankey babies (baby blankets with heads) and any blanket that bought for him. He had his favorite little toys but would rather me bring him home a blanket for a surprise after a trip to the store. When I got home from work every day, he would bark at me and grab his favorite blankey for me to come and see. Tuffy was so intelligent that he learned how to open my cooler, not because he wanted to fetch me a beer, but rather dig out one of his favorite treats, ice cubes.

Tuffy was my best cuddle buddy and we spent a lot of time cuddling in bed. I would tell him every morning while we sat outside what day of the week it was. He was so sad on Mondays, because he knew I had to go back to work. His little eyes would light up when I told him it was Friday and the weekend, because he knew that it meant that we were going to have lots of cuddle time. Tuffy also enjoyed many other things. He loved car rides, stroller rides, going to his grandma’s house, getting his hair blow dried after a bath, swimming in the pool, and eating his favorite treats ice cubes and ice cream.

Despite all his happiness and love, Tuffy struggled in life with respiratory issues. I would wake up every day with him to give him his medications, inhaler, and his special diet. He did very well on his medications, but occasionally got sick with an illness that required him to go to the hospital. His little lungs were weak and an illness that would be minimal for a healthy dog was far worse for him. He always seemed to get better with a little help from the vet, however the last time he got sick, he just could not hold on any longer. He so wanted to hold on for me, but his little body was just too weak. He waited for me to reach him at the hospital, so we could say our last goodbyes to each other and I could hold his paw and give him kisses, but I did not have much time. I did everything I could do to keep him by my side, and in the end, I felt so sad because I knew there was no longer anything I could do.

The day Tuffy left me, my mind was racing. I was on the way home with him and I remembered hearing about dog cloning in South Korea. I was so surprised and felt so lucky to discover that it was now being performed in the United States. There was suddenly something more I could do for Tuffy. I decided that I was going to keep trying for him as I had always tried for him all his life. Tuffy was not ready to go and he wanted to keep trying for me. I read the instructions on the ViaGen Pets website and started preparing for the next step. Tuffy got sick on my birthday and passed away on Thanksgiving Day, so everything happed so fast and at a difficult time to get his samples taken that were required for genetic preservation. I knew I probably wouldn’t be able to get the biopsies done until the next day with it being a holiday, so I kept Tuffy’s body at the required temperature until the next day. I called the vet hospital where Tuffy was treated, but they would not call me back. I called Tuffy’s local vet and asked them if they would do the biopsies for me. They were not sure if they wanted to do this, as they had not done it before for genetic preservation or cloning purposes. They tried to talk me out of it saying that it would not be Tuffy and did I really want to go through life with another sick dog. I explained that I knew it would not be Tuffy and I just wanted a piece of him to continue to live on this earth. I also explained that having a clone of Tuffy would be like a book into the future regarding his health problems. Yes, the clone would be prone to the same health issues, but we would know what issues to try to prevent. Tuffy was never a burden to me and I would do it all over again to have a piece of him back. With some persuasion, the vet agreed to do the biopsies.

I called ViaGen Pets that same day and left a message. Codi called me back within minutes to explain the process, the next steps to take, and to set up shipment of Tuffy’s samples to ViaGen Pets. The samples reached the ViaGen Pets lab and they began culturing his cells that week. I was praying that they would be able to culture and preserve his cells successfully because this was my last chance. I contacted Codi a few weeks later because I was so anxious, hopeful, and excited to know how things were going. Codi said that they had seen initial cell growth and it would be completed within about a week. Codi contacted me a week later with the good news. They were able to obtain 5.3 million viable cells which would be cryopreserved! I was so happy, relieved, and excited. My little boy was still trying for me and wants to live on! I am so thankful for ViaGen Pets and what they do. I feel like Tuffy was a little boy in an adorable little dog’s body. Although he passed away, I feel like his soul remained around me. When I get him cloned, I think his soul will return and enter the body of his clone. He will live on in his clone in a new, young, healthy body. I will once again get to see those beautiful humanly eyes stare back into mine.

The day Tuffy was born was the best day of my life and the day he left me was the worst day of my life. I loved my little boy more than anything in the world and I feel so broken and lost without him. ViaGen Pets has given me hope that has helped me through this tough time. I greatly appreciate their efforts and for them giving me something to look forward to. Someday Tuffy’s soul will return to earth and he will live on in his clone. I plan on naming him Pumpkin, one of my favorite nicknames for Tuffy. My heart hurts so bad without Tuffy and he will never be forgotten. He will live in my heart forever and part of him will live on in his clone Pumpkin. My little boy is still trying and wants to be back with me to tell me everything will be okay. Thank you so much ViaGen Pets for giving me the opportunity to someday soon see my beloved little boy again.