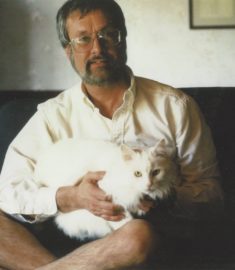 We didn’t know it at the time, but Spock was waiting for me when I went to my first cat show. Duchess had passed away a few weeks earlier, and while I wasn’t yet ready to get another cat, I did recall that a friend had a Burmese whose personality I really liked, and I wanted to get some cards from local breeders for when I was ready. On the way out a local animal shelter had set up an adoption center, and one of the cats, an approximately six-month old, white, long-haired fellow, reminded me of one from Duchess’ first litter.

Spock was quite shy initially, and indeed when I took him home and let him out of his carrier to explore, he wasn’t anywhere to be found just a few minutes later. It turns out he had hidden behind the refrigerator. I let him stay there until he was ready to come out on his own, which didn’t take too long. I think his previous owner had mistreated him as whenever I moved my hand to pet him, he’d cower as if I were going to hit him. He eventually became more comfortable around the house, but travel always upset him. I recall that for any car trip, regardless of length, he would sit motionless wherever he was. When I moved from the Washington, D.C. area to Southern Illinois, he was catatonic for the entire drive on the first day. That night I let him out of his carrier when we arrived at our motel and he slowly walked around the room, sniffing everything, before he jumped up on the bed and raced underneath the covers between my legs, remaining there until morning.

I just remembered another incident from that drive. When we arrived at our new house, Spock, an indoor-only cat, adjusted fairly quickly. One morning I got up and couldn’t find Spock. When I went to look for him, I noticed that the door to the back deck had been left open. I went there to look, and saw that he had jumped from the deck down to the yard, and was now looking up at me. I ran downstairs to get him, and meanwhile he went tearing around the house one last time before he let me take him back inside. He seemed to have been happy to satisfy his curiosity about what was out there, but never made a move to get out again.

Spock was the most laid-back cat I’ve ever had. One time we acquired a Siamese mix who was half Spock’s size and always wanted to play. Newton would sit right in front of Spock and taunt him, waving his paw as if he were about to hit him. Spock would just sit there and let him wave his paw all he wanted…until he had had enough and finally chased him around the house. Spock was also a cuddler—always happy to sit in your lap and fall asleep.
Spock eventually succumbed to complications from kidney disease when he was about fifteen. It was only 2001, and neither the vets at the vet school nor I knew anything about cloning. They finally preserved some bone marrow cells on the grounds that they were least specialized and therefore probably more easily cloned.

A few months later I had a dream that Spock returned to the real world for one day so we could be together. We both knew that this was the deal and that he had to return at the end of the day. We cuddled, played with his favorite toys, and had a good time all day. I recall waking up feeling refreshed and in the best mood I had been in for a while.