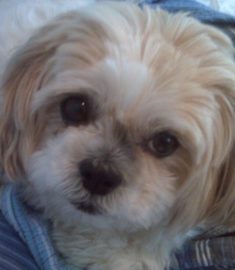 Hi, I’m a retired police officer and years ago I was hurt on the job and had surgery on my neck. A two level cervical fusion with plates and screws. Anyway, during this time I was on desk duty and a gentleman brings in this dirty, raggy looking dog. He claims she was wandering around by herself and he couldn’t find the owner. Typically , people do this if they don’t want the dog anymore and don’t want to put them in the street. But, either way, we keep a dog cage in every Precinct command for any type of transport to ASPCA or shelter for any animal related jobs we may get. Well, they were called in for pick up of this little dirty Lhasa Apso/ Shitzu dog to be transporters to Manhattan to ASPCA. Meanwhile I was just getting off work and actually went to my car, and then thought about it differently and I walked back inside to get the dog and told her you are coming me now. You will be loved and safe. From that moment on that change my life completely. Her name was Princess. Now I’ve had pets dogs and cats and rabbits etc… my entire life, I’ve never had a dog like this before. The expressions on her face and the love she showed was beyond priceless. The many kisses and she was very very sweet and well behaved. You see , I had Princess from 03/2006 to 03/2017. She just would make a horrible day turn completely around when she saw that you were down and give you extra love and attention. My father, who was hospitalized at a time and then into a nursing facility with cancer, absolutely adored her. I would bring her into the nursing facility for a visit and she would stay on his bed and he would play with her. In the meantime, I would leave to go get some food or something for him and then come back and she would be asleep by his side. He always told me she’s very special and is cute as a button. I told him I know I’m very lucky. I told them we were lucky we found each other. Few months later my Dad got really sick and he had to be transported to the hospital. I was there at a time with Princess. As they were trying to lift him to put him onto the stretcher she did not want to leave and tried jumping on the stretcher with him to be next to him. It was very emotional to see that bond and she did not want to leave his side at all. My dad wound up passing away three weeks later at the hospital. Princess lit up his day whenever I brought her there. When I used to walk through the hallways at the nursing facility on the way to go see him everybody wanted to see her and play with her and said how beautiful she was. This dog would give me kisses every single night before we went to sleep and would love to cuddle. Sometimes, I’d wake up in the morning with her sleeping right up against my head. She was incredible. Princess also helped both of my aunts who had cancer and passed in 2015. One of my aunts mentioned to me that Princess, the way she looked at me, she had soulful eyes! At that moment I knew exactly what she meant and she was right. She would just stare at me and look to my eyes with that look of love and content. She would leave by my aunts aside both of them within seven months person and not want to leave them. She didn’t like violence or fighting either. If she heard two cats growling at each other she would run into the other room and get into the middle of it like a referee and break it up. In December 2016 she was diagnosed with cancer and surgery was performed successfully and she recovered well for a few months but they biopsied and come back and said it was a cancer that comes back aggressively. So, a few months later she was gone. It was during this time, having the surgery for the cancer removal that I decided to do my genetic preservation with ViaGen Pets. I waited a year and I was still missing her terribly, my other dog too misses her. So exactly one year to the day of her passing I filled out the paperwork and sent ViaGen Pets a check for cloning. I just didn’t wanna go on without having her back, at least the part of her. Well, now is November 2018 and I’ve got twin Princesses now as of September 19 they were born. Ariel and Jasmine. ( Disney princesses) I thought it was cute. Princess change my life forever and I know I changed hers as well and gave her the best life I could. Now, it’s time to continue the bond ! I love and miss you so much baby!