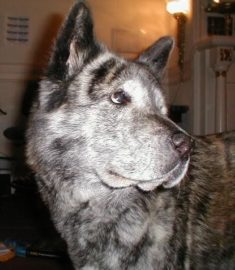 In 1993 I met an Akita breeder about the possibility of getting an Akita. He happened to have two puppies there. I was playing with one while a little female puppy watched me warily from
the distance.

At some point she clearly made up her mind, she came running over to me and started licking my face wildly. She came home with me that night and she became Kodi T. Bear, and she became family.

She is infamous for being the first dog in the world to have a home page, an email address, and also be listed in the phone book.

Kodi became the center of my life. Akita’s are notorious for their loyalty, but that loyalty was returned. She
was willing to do anything for me, and that’s why, when she became ill with Lymphosarcoma, I spent the entirety
of my savings on keeping her comfortable and alive for a few more months. When she passed, just days after her
12th birthday, I realized that I had made a terrible mistake in never breeding her. Her family would have been amazing.

I knew that someday this would be possible, and that’s why Kodi’s family is saved at Viagen Pets.