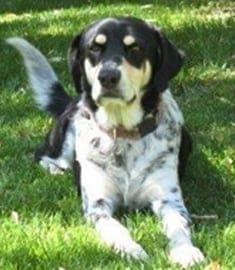 Jack was at a city shelter in Los Angeles when I first saw him in August 2005. He had been found on the street and caught as a stray in the South Central neighborhood, not the best area. A reminder of his background stayed on his muzzle the rest of his life-a scar shaped as though someone had bound his muzzle together with rope or wire.

He was sharing a pen with 2 big, scary looking dogs, and he had been on my list of potentials. The guy was so smart: he saw my girlfriend and came up to the chain linked door and licked her hand through it. That was a sign, I thought, that he was meant to come into our lives.

Despite such a background, he was a most loving dog. It was heartbreaking that I had to lose him in June 2012 when he got cancer. However, knowing that I could preserve his genes with ViaGen Pets gave me some comfort. I’m hoping that someday, I can bring back at least a version of Jack, and love him as much as I did the original. Thank you.