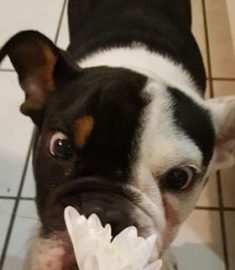 So, here we go… well ViaGen Pets and your staff, you all are a blessing. I found ViaGen Pets on the net when my beloved boy Chopper passed after the vet made a mistake and forgot to turn the oxygen on. I held him till his last breath and was crushed. I have to explain Chopper and the meaning behind him. I found him at the shelter in are local town here in Florida after bringing in two dogs we found running the side of the road. They had chips, so I knew they were going to their homes. When Chopper began that day he was spoken for, they said, so I put a hold on him in case they didn’t call back. About a week later, I got a call. They had a outbreak of parvo, so the lady said come get him. He was six weeks old so he went everywhere with me. The only time Chop didn’t was when I had to work. Down the line I got sick, very sick. He was the only one that stayed by my side and made sure I was ok. Well, I beat it and moved on. Several years go by. I was out on my motorcycle and was hit head on. I was in the hospital for a long time and was paralyzed from the waist down with little idea if I would walk again. Mom was in the hospital for heart problems, my brother for a brain tumor, so I was alone again. But Chopper never would let me be like that. He helped me with everything from eating and helping me get food, to just daily things. Even the shower, and he hated water lol. He helped me walk again, went to every therapy session and pushed me to walk. It was like he knew what to do. He was never trained for anything but love that he always got. He was, and always will, be my best friend. The best of best friend. I can’t even write this without choking up. Thank you unbelievable people for being there. He is missed every day, and when I get up the funds he will be with me again in a way and it can’t come soon enough. I took on a beautiful little girl that is slipping away. She is only five months old and is the product of a bad breeder. I took her because she needs some love and is passing from polycystic kidney disease. She is so sweet. I would have you guys do your work but I don’t want to pass on the bad genetics. It’s ripping my heart out, but I wanted to pass Chopper‘s story on to you. He was more than a dog, he was my best friend. I even built a motorcycle with his ashes in the paint so he can always ride with me.