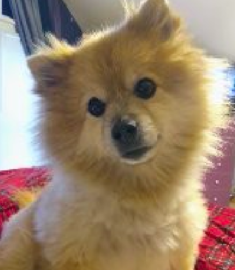 Burlington was a sweet loving little guy brought to me fate. After the passing of my late dog Tuffy, I was heartbroken. I still had my little girl Sweetie Pie, but we could both feel the dynamic of the household change. There was a piece missing. I know I could not replace my Tuffy, but I felt like Tuffy was urging me to fill that void with another little boy that would bring me happiness. He wanted me to have another boy until he could come back to me someday (I had Tuffy’s genetic material preserved and plan on cloning him someday).

I was on Adopt A Pet, and I admit I was looking for a dog that reminded me of Tuffy, when out of 500+ Pomeranians in my search criteria, Burlington jumped out at me. His look was much like Tuffy, same exact weight, and even the same health problems. Then I read his story. It seemed as though about the same time I was going through the loss of my Tuffy, Burlington was going through the loss of his mama. I thought maybe we could help each other grieve and fill that void for each other. That is was what happened, and I adopted Burlington.

Burlington lived most of his life in the New Orleans, Louisiana area with his mama Judy. After her passing he was rescued by a group in Arizona. Had he of not been rescued, I think his live would have been cut short. It was fate, and someone was looking out for him so he could one day come to me. He was destined to come to me to teach me a lesson in life, that lesson being, it’s okay to love again without replacing or forgetting about the one that you lost.

After discussing with Burlington’s foster mom his health problems and strict diet requirements, it was decided, who would be a better person to deal with his health issue than me (since I had already dealt with the same issues with Tuffy). It was set, after his move from Louisiana to his short time in foster care in Arizona, Burlington was moving north to Wisconsin onto the third leg of journey in life to live with me. I hired a pet taxi man from Texas and within weeks, Burlington arrived at my home. It was a rainy, snowy, icy night when he arrived. He was very confused, as I doubt he had ever seen snow before. He said goodbye to his pet taxi man and came into my house. Within five minutes of being in the house, he wrapped his arms around my neck and gave me a big kiss. From that moment on, I knew we would be just fine, and he was so happy to have found his furever mama.

After some time, Burlington adjusted to his new home. Sweetie Pie felt more like herself because she had her passive role back (Burlington was an alpha). Burlington loved to go for walks, but was not much of a toy guy. Instead, he preferred blankets. Once again, this was much like Tuffy’s preferences. His grandma bought him a baby tag blanket, and by far that had to be his favorite blanket. He would chew on all the little tags and sleep with it.

Just as my other dogs, Burlington was a well spoiled little guy. He got a My Pillow bed, yet he slept on the couch when I was at work and he slept beside me in bed when I was at home. Sweetie Pie is not much of a cuddler, but Tuffy was. I now had a new little cuddler, Burlington. He had to lay right on my pillow with me. Burlington had a few quirks about himself. He had a terrible fear of the stairs in my house. He would go up them, but I was never able to get him to go down them. Burlington always wanted to be by my side, so I carried all twenty-two pounds of him down the stairs, multiple times a day. He did figure out how to navigate the stairs on the deck to get into his fenced in yard, however it looked like a bit of a challenge for him. When he would walk up the stairs, all four legs moved separately, one foot at a time. I had never seen a dog go up stairs in this way. Most dogs kind of hop and use the front and back legs as pairs. Needless to say, he was quite an uncoordinated little guy, but so cute. Another one of his little quirks is that he did not like to be brushed, unless he was being brushed while getting his hair blow dried. Therefore, if I wanted to brush him it entailed a bath and a blow dry as well.

Burlington could be a little mischievous at times. He liked to run off with my socks out of the dirty close basket and take them to his bed. He was also a little sneak about food. I learned very quickly not to have food anywhere he could reach it, because it would be gone. Other things Burlington liked was going for car rides and playing in his new found love, the snow. He would bury his head right in the snow bank! Out of all of his favorite things, I think his most favorite thing in the whole world was cuddling with me.

Burlington did not have any major health concerns during the time that I had him except for the reformation of a urinary stone, despite his strict urinary diet. However, after his last visit to his primary vet for a routine shot for heartworm prevention, Burlington’s health started to decline rapidly. He couldn’t walk straight, he was lethargic, did not seem to engage with his surroundings, started have rapid breathing, lack of appetite, and extreme weakness. I was so worried about him and continued to take him back to his primary vet. They then diagnosed him with an enlarged heart, gave me a prescription and sent me on my way. I was impatiently trying to give the medication time to work, but I never seen any improvement, only decline. The day after Valentine’s Day, I decided that it was time. Burlington had to go to the veterinary hospital because I knew there was something majorly wrong. He was so weak and they said he needed to go into the oxygen chamber immediately. I had high hopes that Burlington would be okay and he would be fixed up, but I was terribly worried because the same thing happened to Tuffy right be for I lost him.

For a week I was on a rollercoaster of emotions, waiting for some good news, getting bad news, just hoping that he would be okay. All kinds of tests were ran on Burlington, but as good as the veterinary hospital is and as many extraordinary people that work there, they could not pinpoint what was exactly wrong with Burlington. He had all kinds of things happening all at once that did not fit any one diagnosis. Burlington’s lungs were slowly giving out throughout the last week of his life as he went on and off the ventilator. He was getting blood clots in his lungs and his health was failing rapidly. I kept telling them to do more tests, but we were running out of time. I went to see Burlington, he was sedated on a ventilator and looked just like Tuffy lying there. It was the same room, same table, same ventilator. I thought, “how is this fair?” “Why so soon, the same thing as Tuffy?” The vets told me Burlington could hear me. I told him how much I loved him and that wanted him to come back home with me. I rubbed his ears, his back, and held his paw. I brought him his favorite tag blanket to comfort him if he woke up. I kissed him again and told him how much I loved him and wanted him back. The beepers on his ventilator were going off, so I knew he could hear me and was happy to know I was there.

The veterinary team and I decided that we would try one more treatment, and all I could do was hope he got better. I got a call in the middle of the night and knew it was not good. They told me that Burlington’s lungs were tiring even with the help of the ventilator. I made it just in time to say goodbye kiss him, and tell him how much I loved him. Everything seemed so surreal. I had just gone through this only a year and a half before with Tuffy. I realized that it does not get any easier when your dog’s wings are ready, but at least I could tell Burlington that I would see him again someday in his new little body with no pain. I decided I had to get him genetically preserved, just as I did with Tuffy.

Burlington and I just did not get to spend enough time together. I feel like there was another lesson to be learned. I was given a special gift to have known Burlington and call him my little boy, but why was he taken so soon? I think Tuffy was living through Burlington and the message was, “although you cannot exactly see me, I am still here.” I am so glad Burlington was the one to deliver that message to me, because I treasure the short time we got to spend together. However, I feel that Burlington nor Tuffy were ready to let me go completely, as I am not ready to let them go. I just know that they are definitely still there and I am fortunate that again I will have them back on earth in their new little bodies with no pain. We will meet at the rainbow bridge someday, but before that they will again bring me happiness on earth. The last week in the veterinary hospital was Burlington’s last leg of his first earthly journey. I am so thankful for Viagen Pets for giving both of my boys four new legs to start their new journeys on earth with me.

This story is in memory of my sweet boy Burlington (AKA Burly, AKA Burly Whirly Bird).

The new little Burlington will be named Whirly Bird, Whirly for short.